Toyota’s been raising a lot of eyebrows with its new sub-four-metre SUV, the aptly named Raize, which is an international model. The compact SUV, which is on sale in Japan, is a badge-engineered sibling to the Daihatsu Rocky that had been unveiled earlier at the 2019 Tokyo Motor show. We take a closer look at the Toyota Raize and pinpoint its relevance for the Sri Lankan market.

The Toyota Raize is not the brand's first SUV that's under four metres in length. In its domestic market, Toyota makes plenty of Kei cars, which adhere to Japan’s laws for small cars (under 3.4m in length, a 660cc engine producing no more than 64hp, etc). What makes the Toyota Raize somewhat unique is that its 3,995mm length, 1,695mm width and 1,620mm height make it about the same size as the Hyundai Venue, Mahindra XUV300, Maruti Suzuki Vitara Brezza and Tata Nexon. The Raize’s 2,525mm wheelbase and 185mm ground clearance is on par with the segment too, as are the 17-inch dual-tone alloy wheels on offer with the top-spec variants (lower trims get 16-inch steel wheels or alloys).

It’s got a turbo-petrol engine

For the Japanese market, the Raize is powered by a 1.0-litre, three-cylinder turbocharged petrol engine (another obvious indication that this Toyota is not a Kei car). This 996cc engine is tuned to produce 98hp at 6,000rpm and 140Nm of torque at 2,400-4,000rpm and comes paired to a CVT automatic gearbox. To put these numbers into perspective, the Venue’s and EcoSport’s 1.0-litre turbo-petrol engines make 120hp/172Nm and 125hp/170Nm, respectively, while the XUV300’s and Nexon’s larger 1.2-litre turbo-petrols produce 110hp/200Nm and 110hp/170Nm, respectively.

What the Toyota Raize does get, at least for the Japanese market, is an optional four-wheel-drive system, which is a common feature on small Japanese cars. On the WLTC driving cycle, the 2WD model is rated at 18.6kpl while the 4WD is rated at 17.4kpl, thanks to the engine start-stop system that comes as standard.

The new Raize is a compact SUV small passenger car that measures less than four meters in length. It caters to the desires of customers who want to drive an SUV, who want to load their cars with a lot of luggage, but who also wish to have a car that is compact and easy to drive. The car was developed to be active, useful, and compact. Easy to use both for leisure on weekends and for everyday use, the Raize provides daily support for customers in a variety of active scenarios.

The new Raize is the first compact car produced by Daihatsu Motor Co., Ltd. (Daihatsu) to incorporate its next-generation car making platform, DNGA, which anticipates product development for both Toyota and Daihatsu brands. All aspects of the car including its platform and powertrain unit have been newly developed, with the goal of realizing outstanding levels of driving performance, luxury, safety, and peace of mind.

The Raize is 3,995 millimeters long and 1,695 millimeters wide. Despite its compact size, the car achieves the dignified and robust appearance typical of SUVs thanks to its large 17-inch tires and protruding fenders.

Its angular bumper corners and trapezoid lower grille create a powerful and wide frontal appearance, while the use of thin LED headlights and sequential turn lights that appear to flow from the inside to the outside of the car hint at the car's advanced technologies. 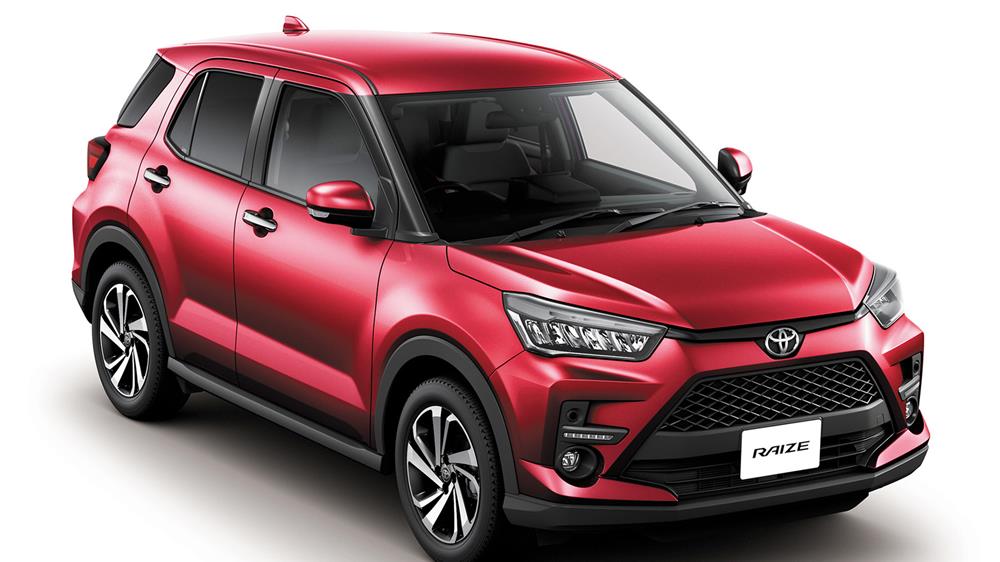 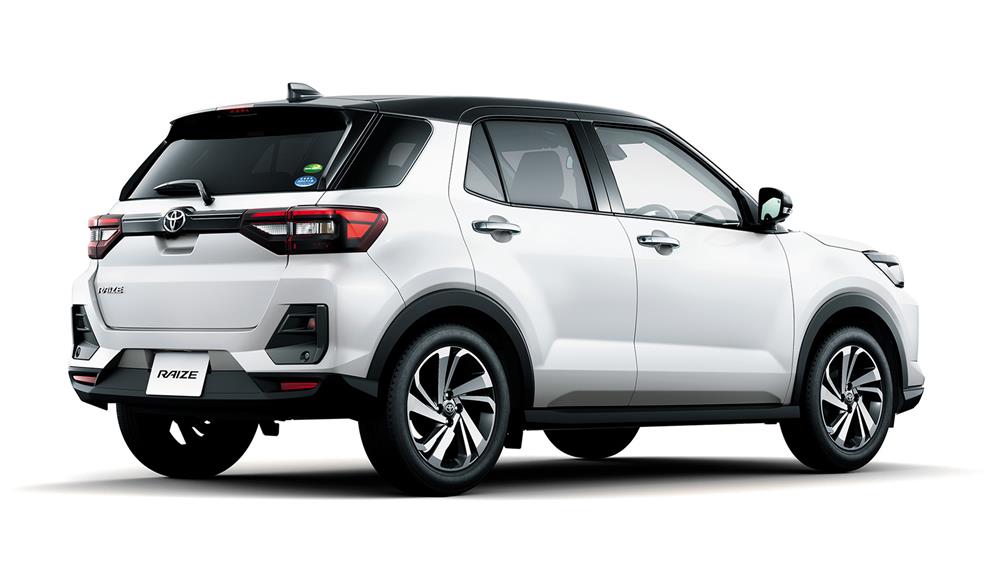 The Raize's instrument panel has been designed to ensure an outstanding field of view from the driver's seat; the operational elements of the instrument panel face the driver's side, while the gear lever has been positioned so that it can be easily operated by a simple extension of the left hand. In this way, the car realizes a driving space that allows the driver to concentrate fully on the road.

On the front seats, the angles of the side-support sections have been raised, while the back rest and side pads have been designed with differing levels of firmness. This new seat shape improves the feeling of support for occupants.

The car also features plating and red accents in various locations to create a sense of luxury and playfulness. 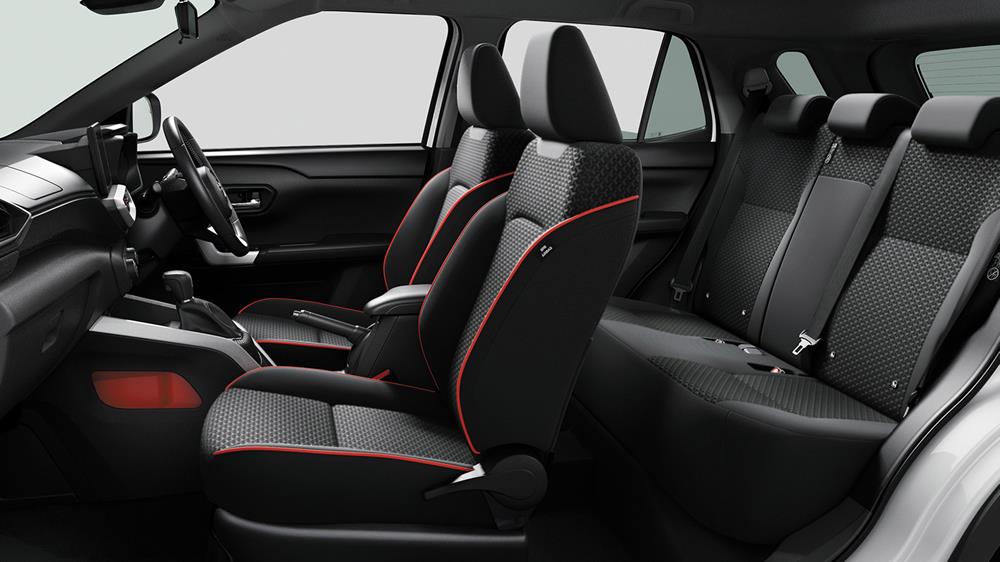 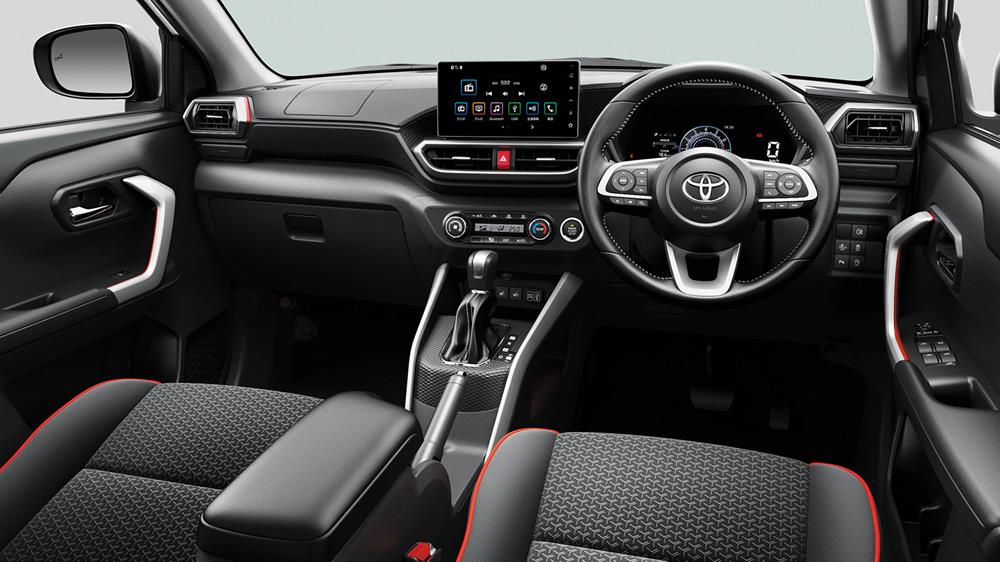 The LED digital speedometer and seven-inch TFT color LCD display are seamlessly integrated, appearing to create a single screen with a cutting-edge feel. The customer can choose between four display styles: Advanced, Exciting, Simple, and Analog. 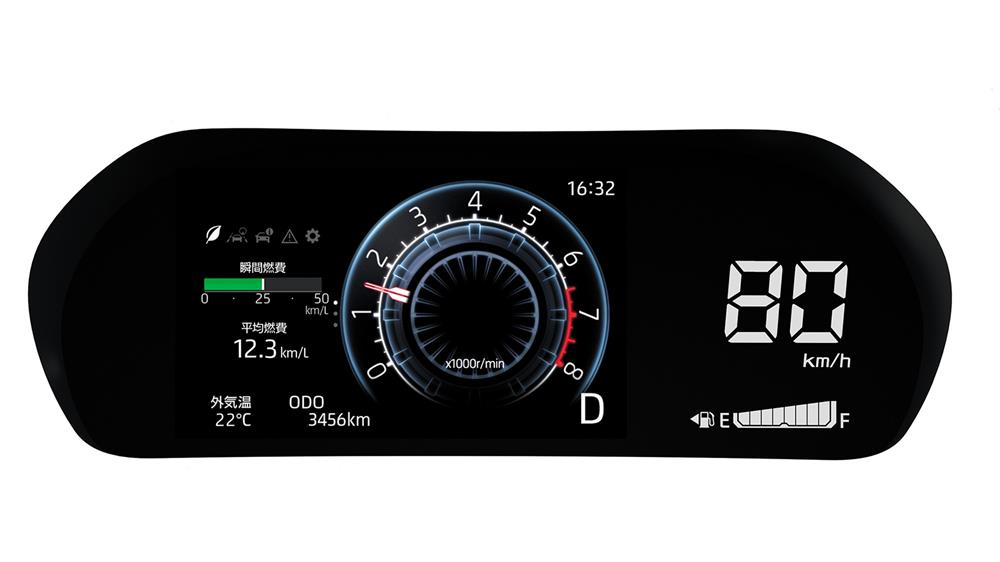 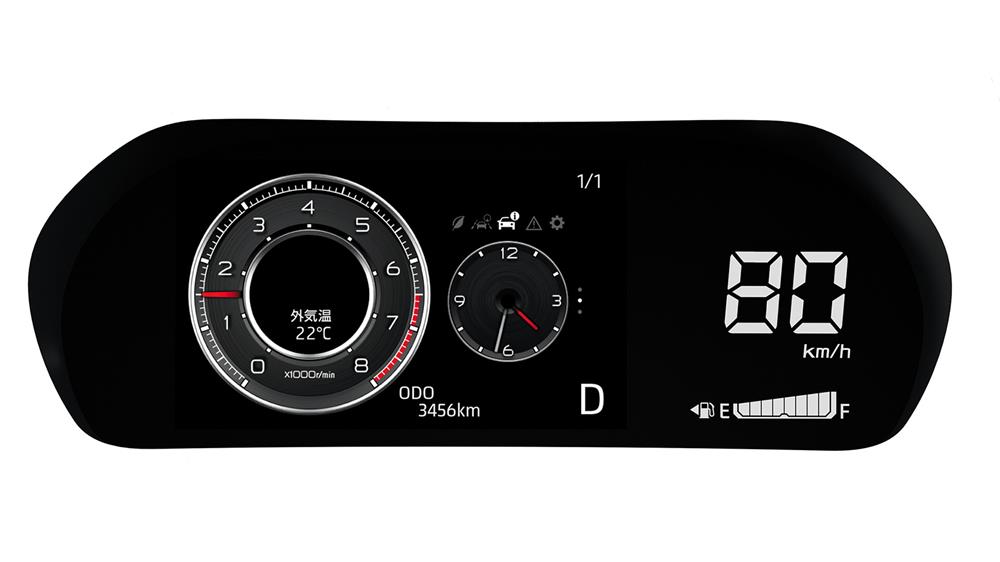 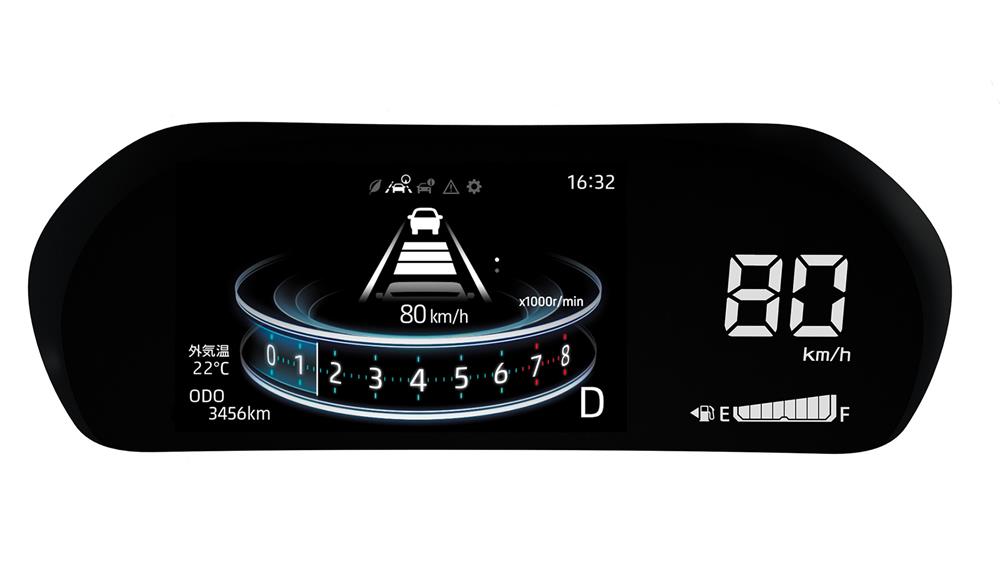 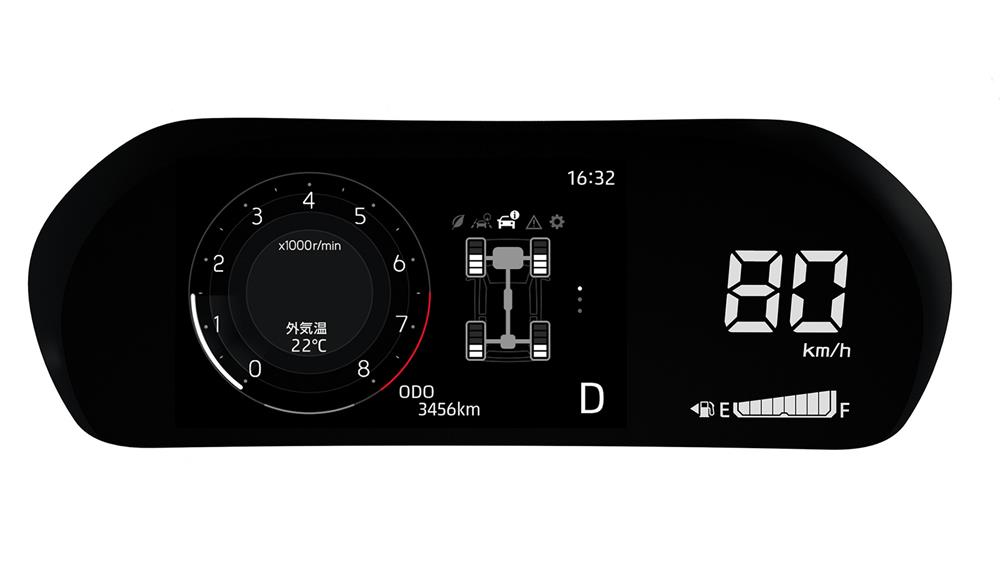 The distance between the front and rear seats is a generous 900 millimeters, providing plenty of space for a comfortable rear-seat riding experience. 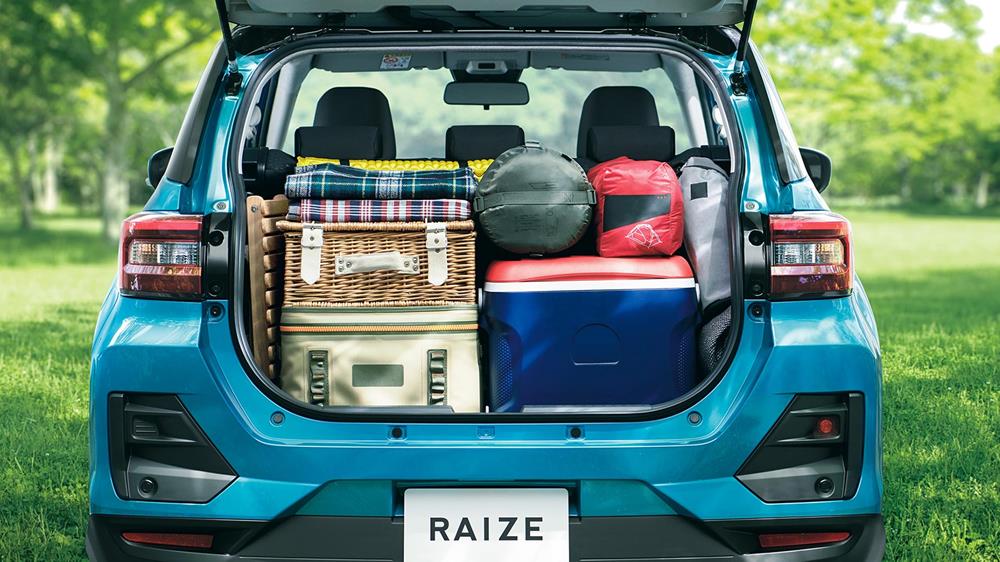 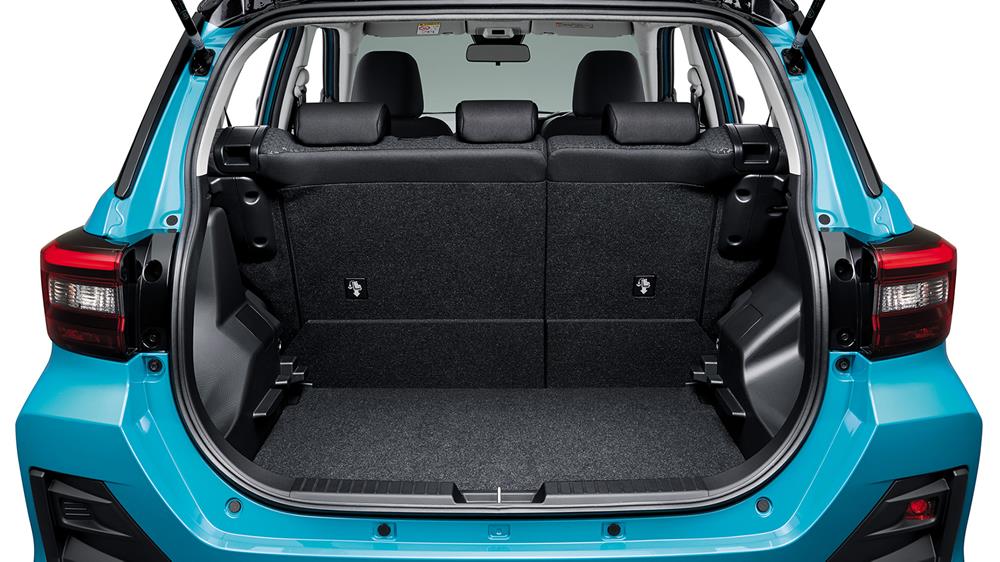 Optimization of the Raize's frame shape and the use of strong, light-weight high-tensile steel plates in the appropriate locations result in a highly rigid body, and contribute to stable vehicle behavior despite the car's height.

The Raize combines a 1.0-liter 1KR-VET turbo engine with a D-CVT that incorporates a split gear used in a Toyota vehicle for the first time to realize the joy of driving and outstanding fuel efficiency. The powertrain provides the torque of a 1.5-liter-class engine at a variety of engine speeds, from low speeds upwards, which results in powerful acceleration. With regard to fuel efficiency, the 2WD models achieve 18.6 kilometers per liter in WLTC test cycles, while the 4WD models achieve 17.4 kilometers per liter.

D-CVT adds split gears to existing CVT belt drives, and uses both belt and gear drives at high speeds for improved transmission efficiency. The gear-ratio range has also been expanded to provide powerful and smooth acceleration at low speeds, and fuel-efficient and quiet performance at high speeds.

The 4WD models are equipped with Dynamic Torque Control 4WD. When accelerating from a start or when driving on slippery road surfaces, this function distributes torque in an optimal manner to rear wheels according to vehicle conditions.

The Collision Warning Function and Crash Avoidance Braking Function are capable of detecting both pedestrians and vehicles.

The Erroneous Start Prevention Function with braking control (forward and backward) helps to reduce crash damage when the accelerator is mistakenly engaged instead of the brake when parking.

The Raize is equipped with a smartphone-linkable nine-inch audio display. The display enables the use of apps that cater to SmartDeviceLinkTM and Apple CarPlay, so expanding the range of choices available to the customer. 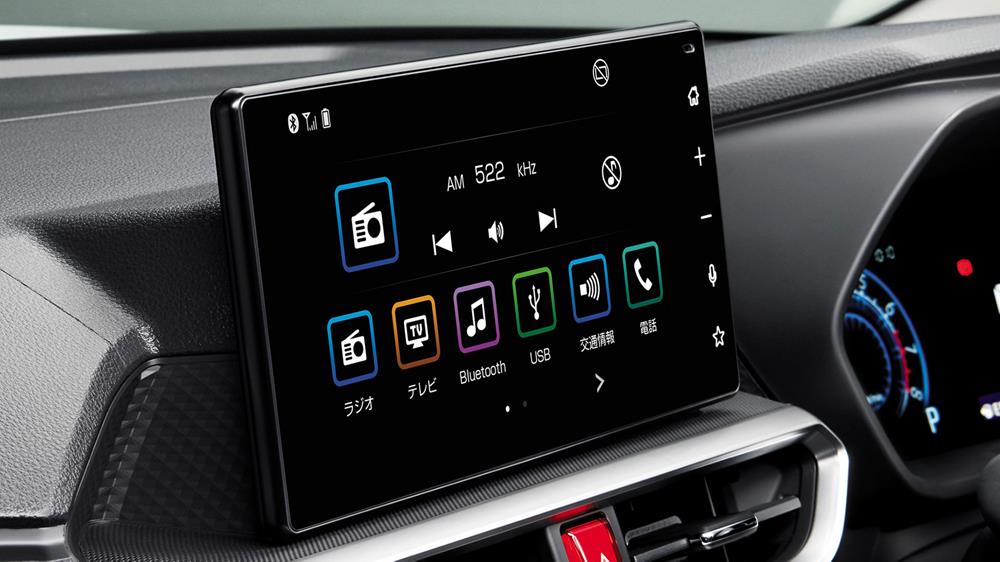 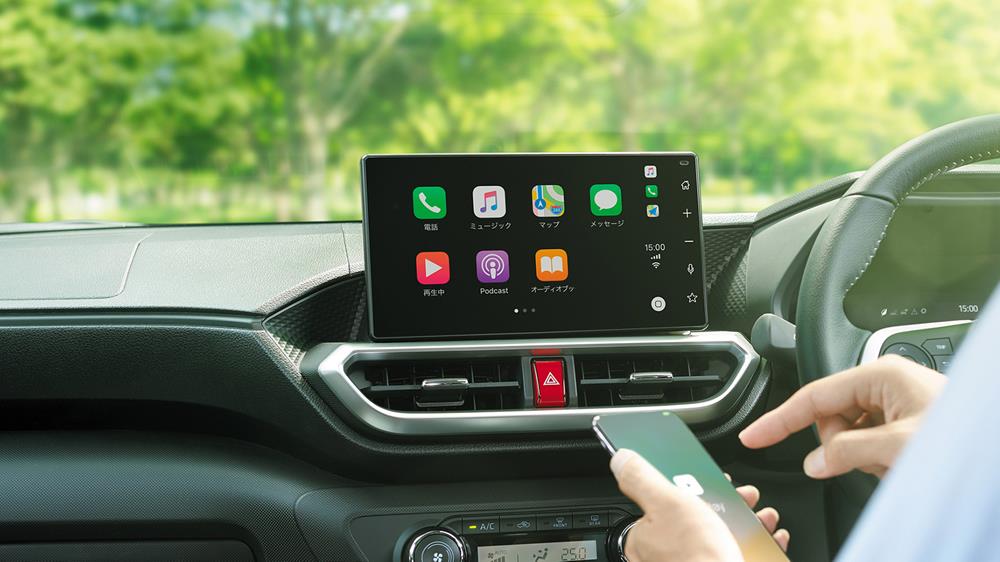 The Review of Toyota Raize by ElaKiri YouTube Channel

We have got you covered. Explore more related articles.
Nissan Patrol 2020 Review
OverviewThe Patrol Y62, to give it its full in-house code name, is very different from every Nissan Patrol that preceded it. This Patrol has a big V8 ...
Read the article
Toyota Yaris Hatchback 2020 Review
OverviewThe new model Yaris is Toyota's first car to adopt the TNGA platform (GA-B) for compact cars, which features a body developed to be lightweigh...
Read the article
The Aston Martin V12 Vantage Review
Aston Martin has confirmed it will once again shoehorn a massive V12 into its smallest car, and, yes, we can officially call it: Christmas has come ea...
Read the article
1970 Ford Cortina 1600GT Review
The MkIV Cortina - named after the equally glamorous Italian ski resort - was a massive hit with fleet buyers thanks to its, erm, sensible styling and...
Read the article
View all articles