A new-generation compact car with the platform, engine, transmission, Hybrid System, and suspension all built from the ground up.
By admin / 19 Aug, 2020
Share

The new model Yaris is Toyota's first car to adopt the TNGA platform (GA-B) for compact cars, which features a body developed to be lightweight and highly rigid with a low center of gravity. The platform achieves both superior handling stability and a high-quality ride by shedding 50 kg in vehicle weight compared to the conventional model, increasing torsional rigidity by at least 30 percent, and lowering the center of gravity by 15 mm. It also delivers driving performance beyond its class by being agile yet Confident and Natural (the vehicle remains stable while driving yet responds naturally to the driver's intentions). 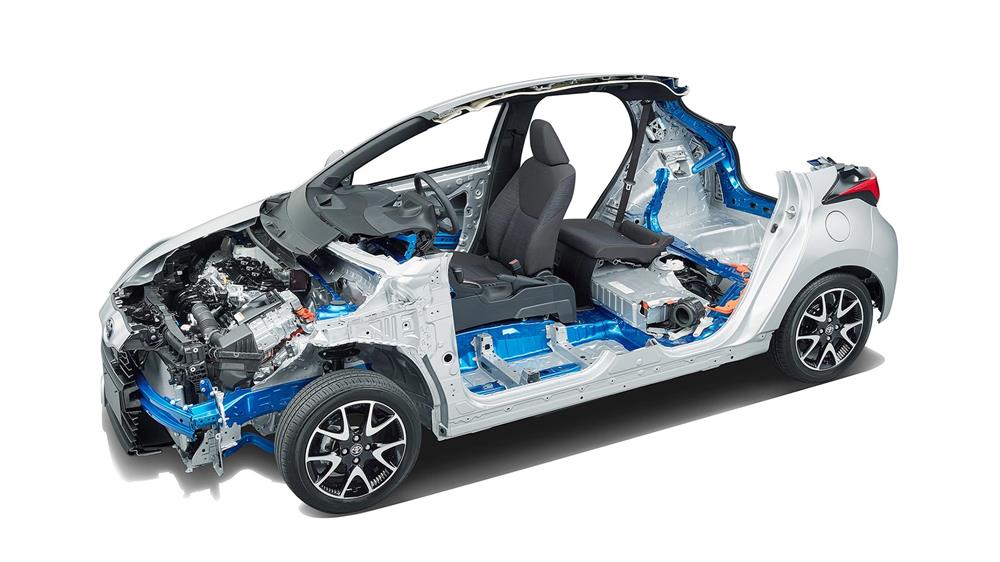 The transmission features a newly developed Direct Shift-CVT unit with a launch gear adapted to the new 1.5-liter engine. This greatly improves transmission efficiency at low speeds compared to the existing CVT and achieves direct and smooth driving according to accelerator operation and excellent fuel efficiency performance. Equipped with a newly developed CVT for the 1.0-liter engine. This CVT is smaller and lighter than previous models and has improved fuel efficiency performance. 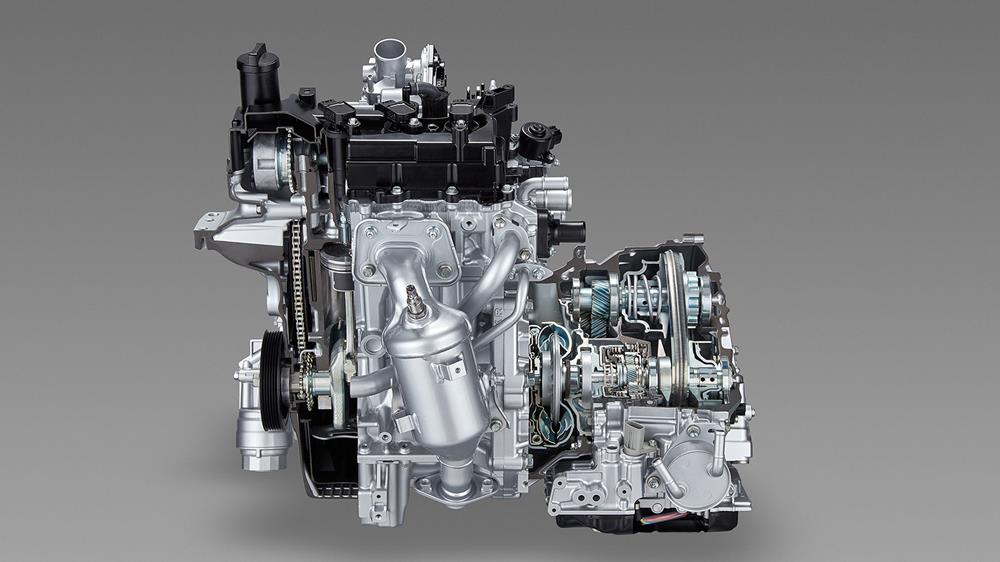 The design concept is "B-Dash!" Be bold, brisk, and beautiful. The image is to dash off with nimble acceleration like a bullet. Toyota sought to create an exterior design that packs an abundance of power to make the car appear as if it's ready to take off at a moment's notice. The clutter-free cabin and compact shape that extends from the center of the body to the front and rear wheels express a design that suggests an active driving experience.

The sharp styling of the headlights gives the face a fearless expression. The rear was designed to make heads turn by integrating the rear window and rear-combination taillights into a new three-dimensional form.

Offered in 12 colors including the newly developed Ice Pink Metallic and Coral Crystal Shine. Also available in a total of six two-tone color schemes paired with either a black or white roof color. 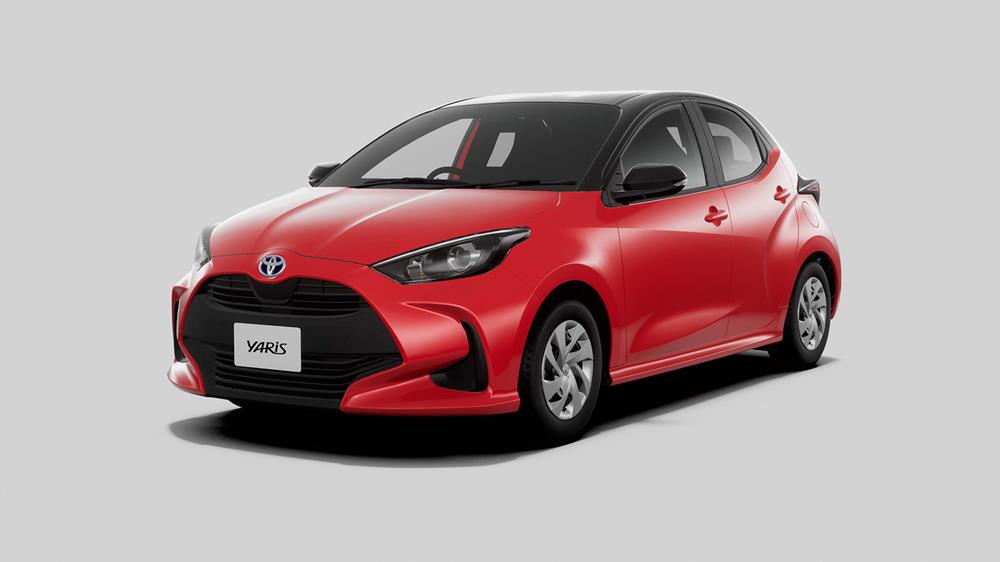 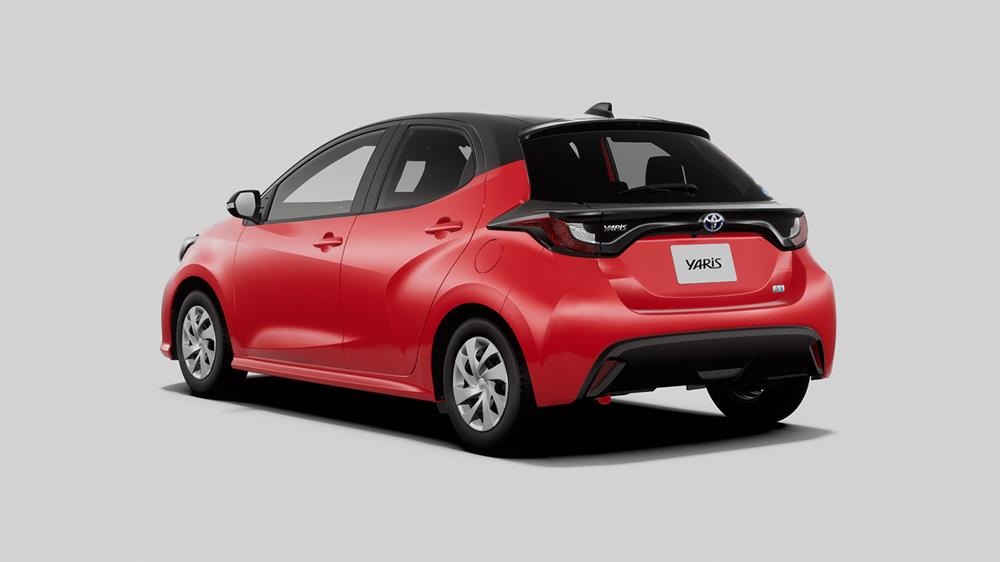 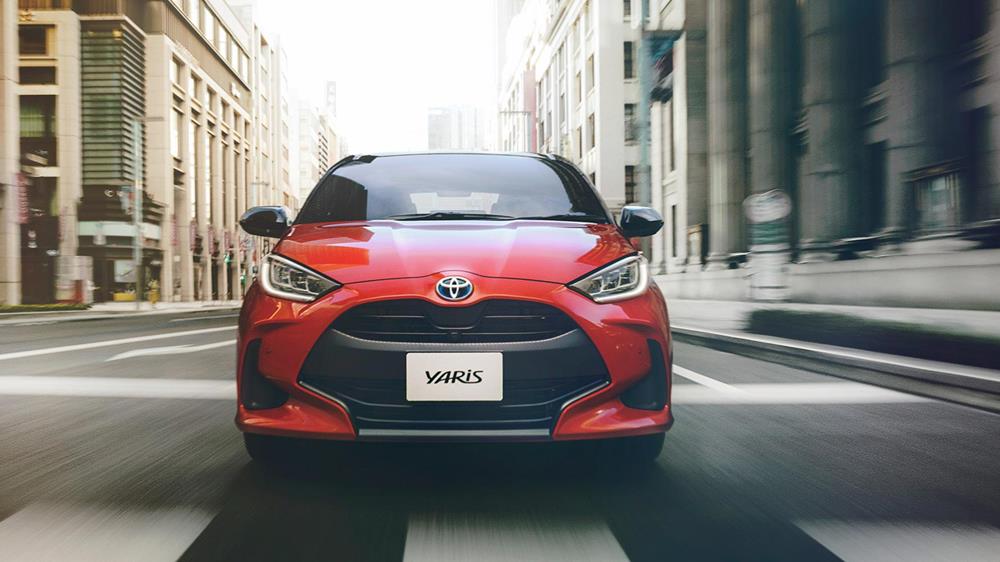 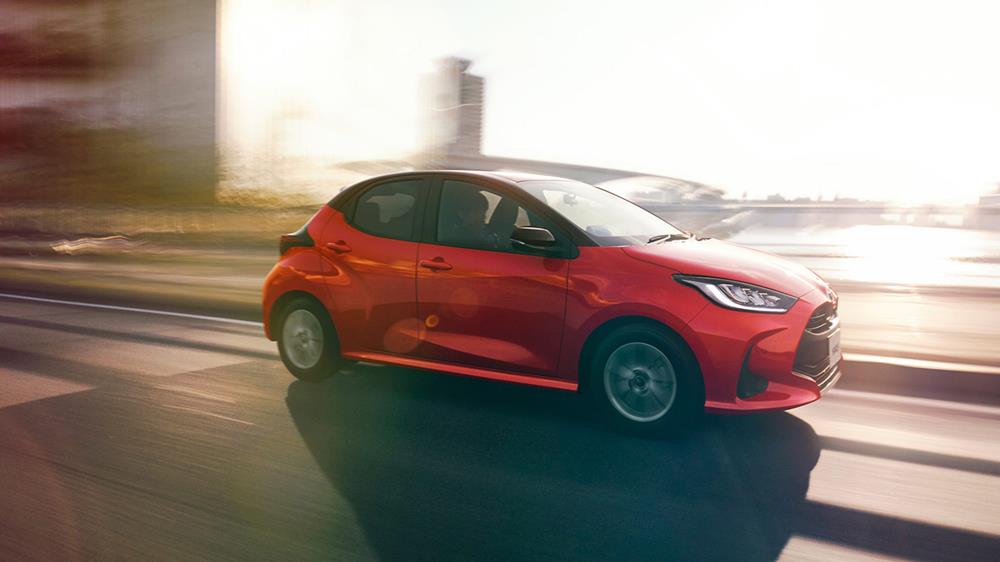 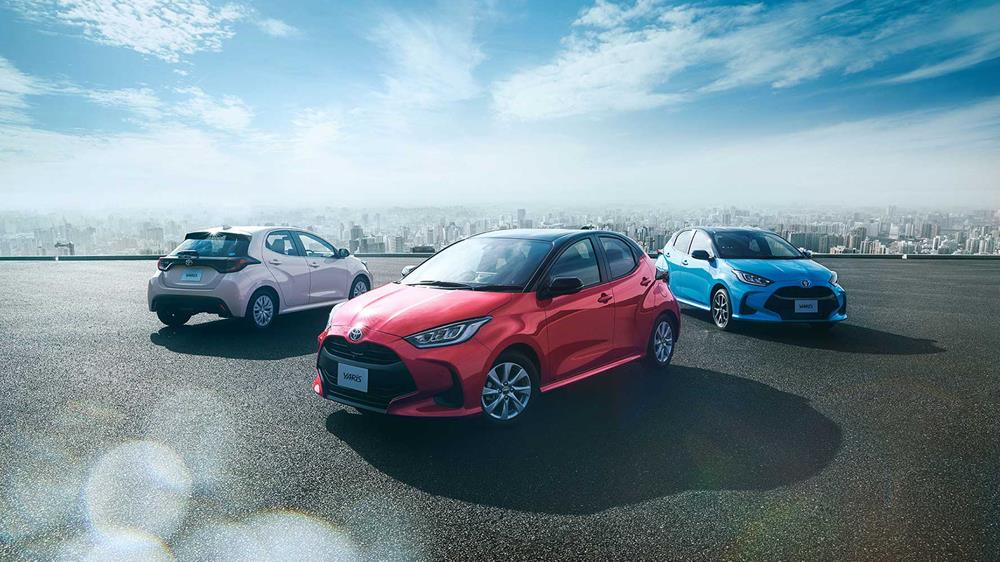 The clutter-free interior provides a spacious and comfortable atmosphere that allows the driver to concentrate on driving. The thin cross section of the instrument panel gives it a wide impression which, together with the small diameter of the steering wheel, makes the cabin feel more spacious and sporty.

Various features were adopted to express the quality of a higher class interior, including hood-less dual digital TFT meters (adopted by Toyota for the first time) and a soft instrument panel, as well as a wider console and increased storage space. 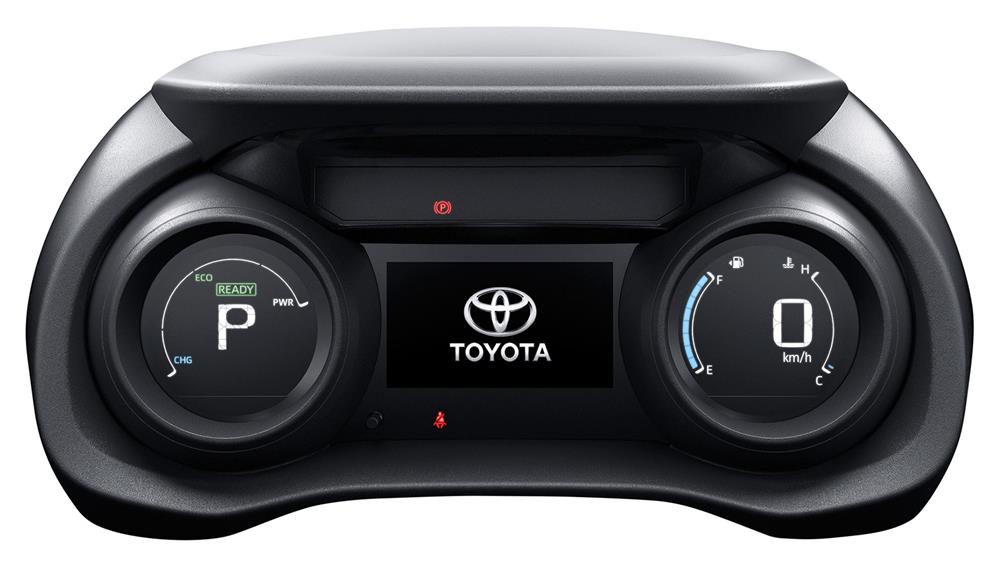 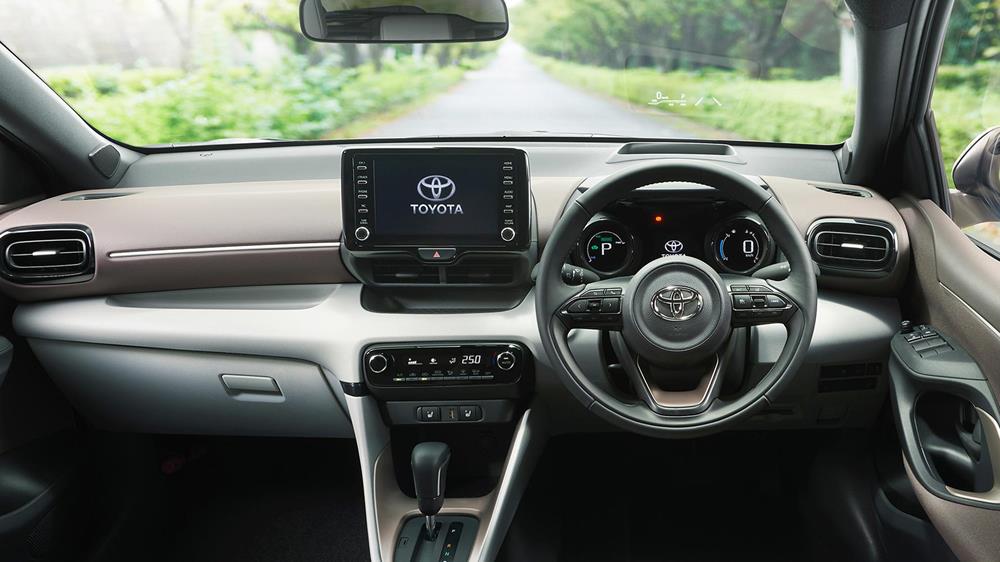 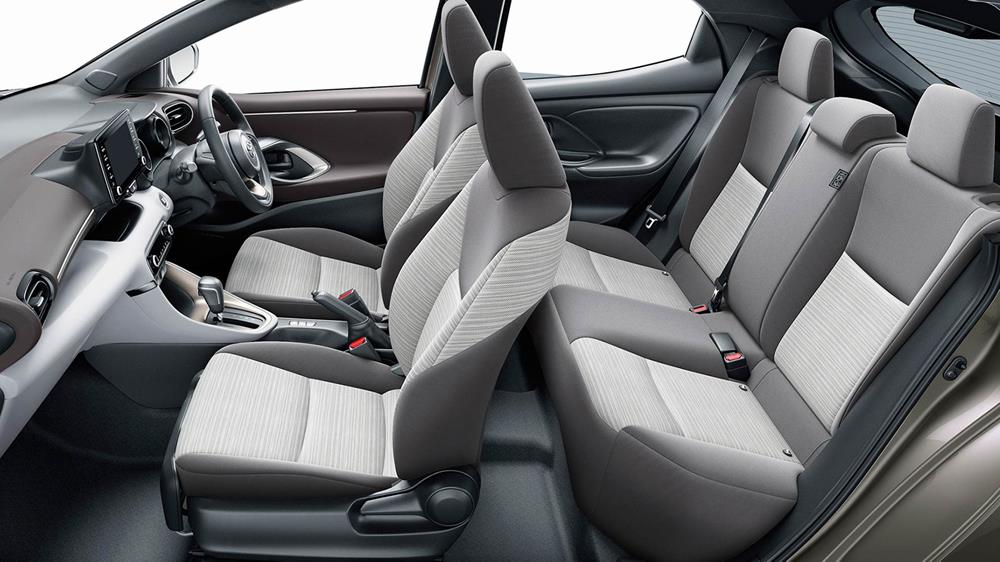 The pre-collision safety system detects pedestrians during the day and night and cyclists during the day to help prevent collisions and mitigate damage. The sensing system has been expanded to prevent accidents at intersections by detecting oncoming cars when turning right and pedestrians crossing the street when turning right or left (adopted by Toyota for the first time).

Toyota also added Low Speed Acceleration Control (adopted by Toyota for the first time) to support the prevention of collisions caused by pedal misapplication at time of reduced speed. This uses millimeter-wave radar and a mono camera to recognize bicycle riders and pedestrians immediately in front of the car. This control helps prevent collisions and mitigate damage by suppressing the engine output or by lightly applying the brakes to suppress acceleration if there is an object in front of the car and the accelerator pedal is depressed with excessive force when starting from a standstill or during low-speed operation. 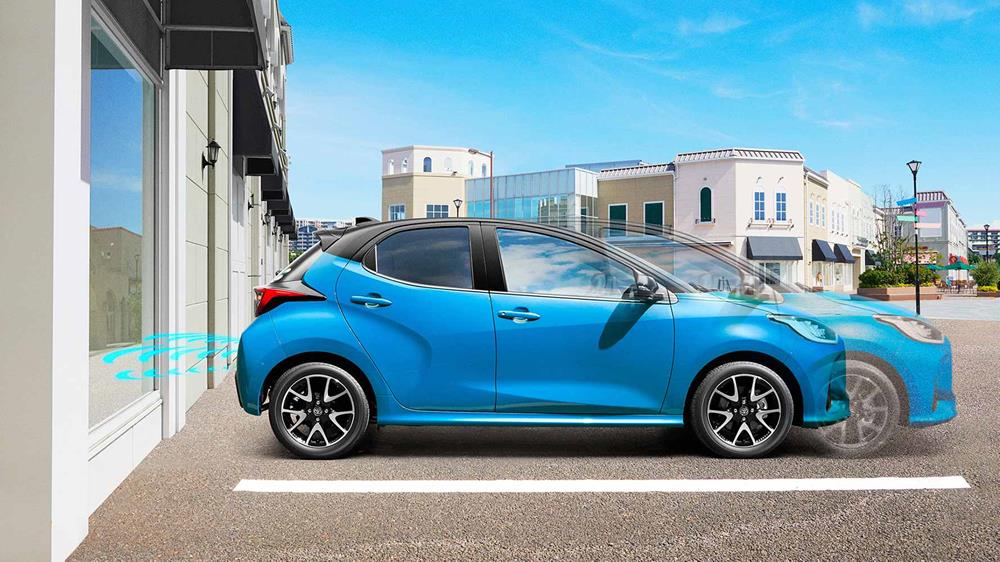 * Dynamic Radar Cruise Control with full-speed range that supports driving behind another car.

* Lane Tracing Assist (LTA that enhances steering so cars can remain centered in the same lane when using the radar cruise control.

* Road Sign Assist (RSA) that displays road signs recognized by the camera on the display so that drivers do not miss them.

The new Yaris is equipped with a Secondary Collision Brake, which contributes to mitigating the damage caused by secondary collisions. The Secondary Collision Brake and the brake lights are automatically activated if the SRS air bag sensor detects a collision and activates the air bags. This decelerates the vehicle to mitigate damage caused by secondary collisions.

For the first time, Toyota is introducing Advanced Park (depending on the vehicle grade), which represents the cutting edge of Toyota's Advanced Parking Support System and is based on Toyota's automation concept of having the car and driver act as partners. By setting the parking spot in advance, the system can also park in spots without white lines (a world first) 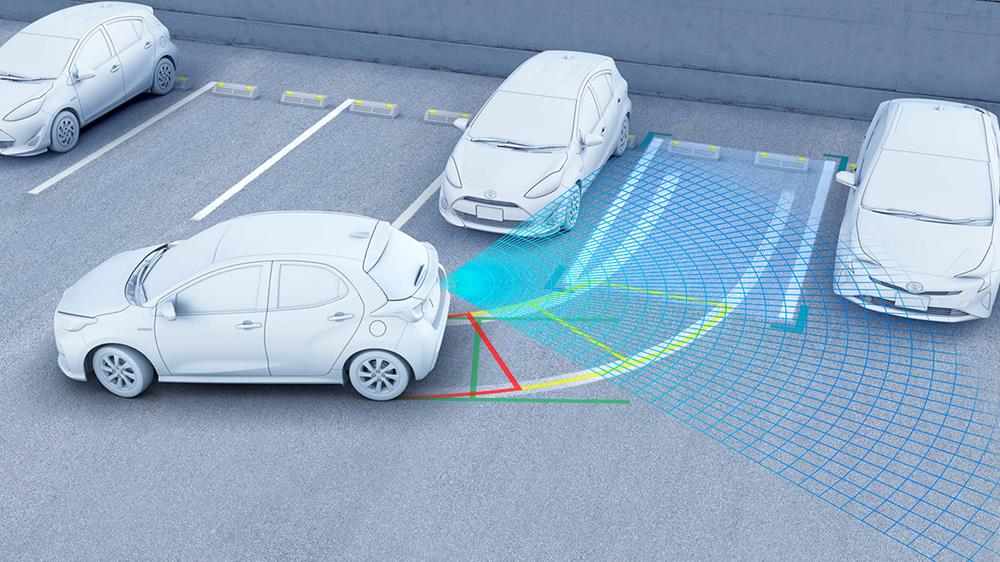 This system supports parking operations by controlling not just the steering wheel, but also the accelerator and brakes (the driver needs only to operate the shift lever according to instructions). The system alerts the driver with audible warnings and applies the brakes to help avoid minor collisions by using cameras and ultrasonic sensors to monitor the vicinity of the car. 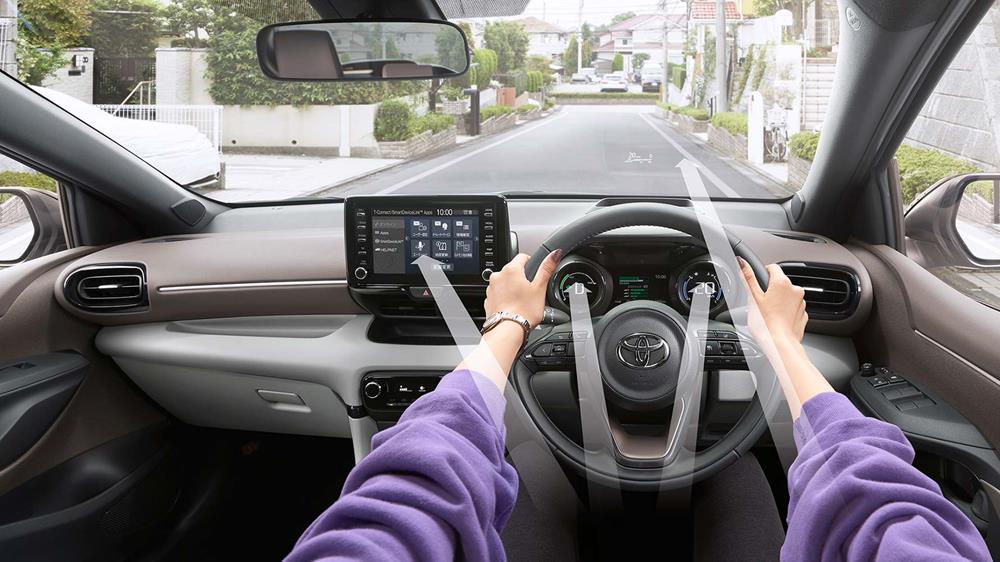 All models come equipped with Display Audio (DA), which can connect with smartphones, and DCM as standard features. This allows a smartphone to be used with various functions, and allows all customers to use connected services. Customers who prefer conventional on-board navigation systems can choose either the Entry Navigation Kit or T-Connect Navigation Kit.

Through SmartDeviceLinkTM (SDL), smartphones can connect with Bluetooth® or a USB cable for use of navigation applications including TC smartphone navigation and LINE car navigation, as well as music and radio applications on DA. Voice recognition enables destination-setting, sending and receiving LINE messages, music playback, and other functions, improving convenience. 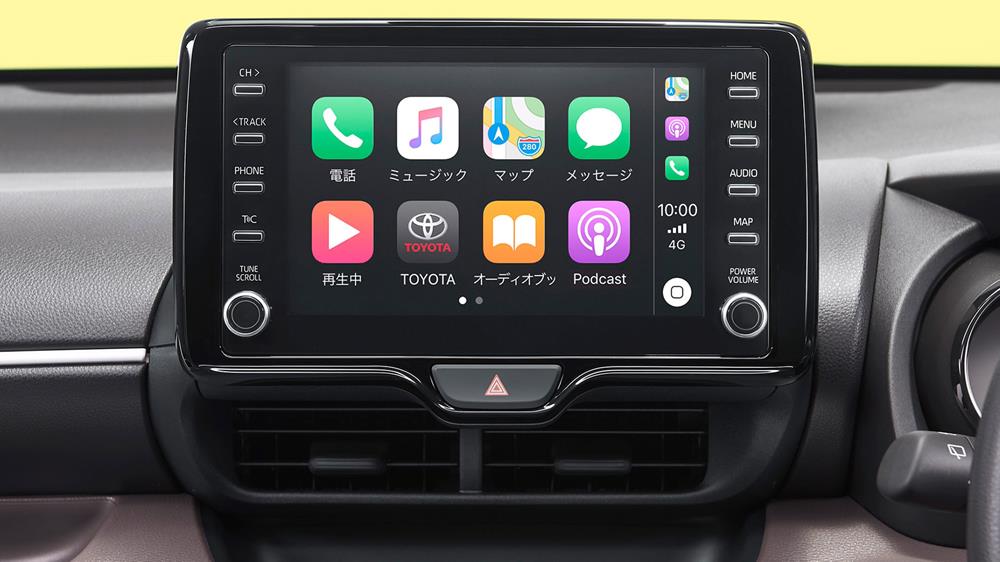 HELPNET is one of the basic T-Connect services that provides drivers with assistance in the event of an accident or sudden illness. Pressing the HELPNET button connects to a dedicated operator who can promptly arrange for an emergency vehicle based on the vehicle's location. It also supports D-Call Net®, which makes decisions on whether to call for a medical helicopter by automatically connecting with an operator if the air bags are activated.

Customers can choose the services they need from among optional services, including vehicle location tracking and operator services, for a monthly or yearly subscription fee.

The new Yaris has been developed in pursuit of new value sought in next-generation compact cars. The new Yaris is a new-generation compact car that adopts the TNGA platform, on which Toyota will base its compact cars for developed countries in the future, and features components built entirely from the ground up, including the engine, Hybrid System, transmission, and suspension. In addition to the light yet highly rigid body and low center of gravity, the Yaris is offered with four different powertrains to deliver agility, superior comfort, and smooth and direct acceleration

* An improved 1.0-liter engine with a compact and lightweight CVT.

In addition to pursuing Toyota's ongoing goal of developing the world's highest level of fuel efficiency for a hybrid vehicle, the new Yaris is offered with E-Four (electric four-wheel drive system), a first for a Toyota compact car. Toyota is among the first to adopt an array of advanced features that defy the common hierarchy based on car size, such as Advanced Park, Toyota's advanced parking support system (a first for a Toyota vehicle); the latest Toyota Safety Sense, which has been expanded to detect oncoming cars when turning right at an intersection and pedestrians crossing the street when turning right or left; Display Audio (standard on all models), which can connect with smartphones.

The Review of Toyota Yaris by ElaKiri YouTube Channel

We have got you covered. Explore more related articles.
The Aston Martin V12 Vantage Review
Aston Martin has confirmed it will once again shoehorn a massive V12 into its smallest car, and, yes, we can officially call it: Christmas has come ea...
Read the article
Toyota Raize 2020 Review
OverviewToyota’s been raising a lot of eyebrows with its new sub-four-metre SUV, the aptly named Raize, which is an international model. The compact S...
Read the article
Nissan Patrol 2020 Review
OverviewThe Patrol Y62, to give it its full in-house code name, is very different from every Nissan Patrol that preceded it. This Patrol has a big V8 ...
Read the article
1970 Ford Cortina 1600GT Review
The MkIV Cortina - named after the equally glamorous Italian ski resort - was a massive hit with fleet buyers thanks to its, erm, sensible styling and...
Read the article
View all articles